Coming to an End

I like this time of year. Things have started to wind down in the garden as the tomatoes hasten to ripen before it gets too chilly and the bees and hoverflies gather the last of the nectar from our Pheasant Berries (Leycesteria formosa). 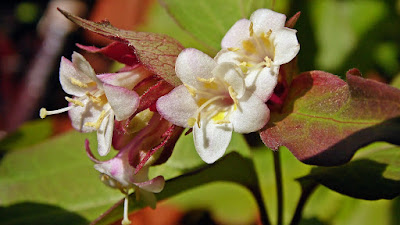 This attractive plant is a member of the Honeysuckle family, native to the Himalayas and China but it makes a welcome addition to our garden and is much appreciated by the insects. 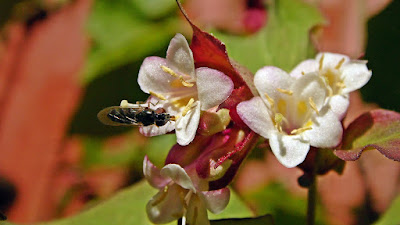 The hoverflies are also busy gathering food from the last of the Gaillardias (Gaillardia pulchella). 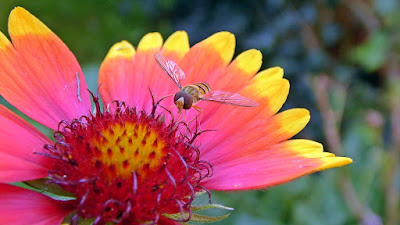 The bright colours of this American native plant ensure that even though things are coming to an end in the garden, we are going out in a blaze of glory!
Posted by Stephen's Views at 12:25:00 No comments: Links to this post

The most common gull to be found in inland regions of the UK, the Black-headed Gull (Chroicocephalus ridibundus) has a population in excess of 140,000 breeding pairs. Their numbers are boosted further during the winter months to around 2.2 million individuals. 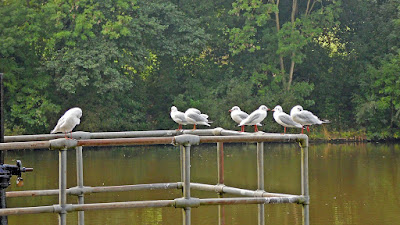 We found these ones, enjoying the peace and quiet of Mapperley Reservoir yesterday. Already in their winter plumage, they have lost their summer head colouring and are left with just a dirty smudge behind the eye. Not that they ever have a 'black' head at all. Despite the name, their summer plumage actually consists of chocolate-brown head-gear. 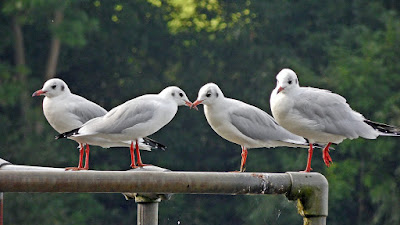 Highly opportunistic in habit, Black-headed Gulls have taken advantage of our 'throw-away' society by making the most of our waste. Land-fill sites have become a stronghold for them although it is thought that they first started to colonise urban areas during the 'little ice-age' of the 1880's and 1890's when factory workers took pity on them and started feeding them scraps. 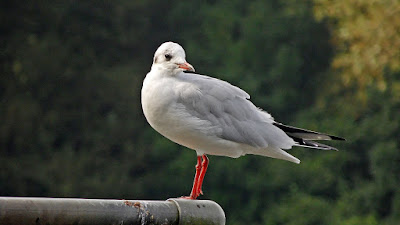 These individuals didn't seem to be interested in scraps. Indeed this yawning one, looked more as if he was ready for a nap! 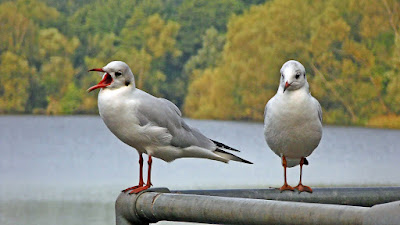 The colours of Autumn are beginning to show around the countryside. This morning, as Malcolm and I took our usual stroll around Shipley Park, the Maple trees were starting to turn from their summer green to autumn gold. 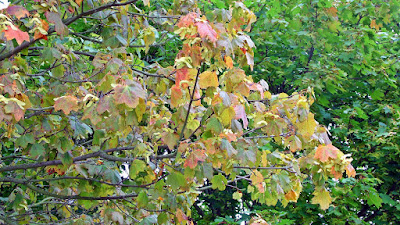 Their distinctive 'helicopter' seeds were clinging to the ends of the branches, waiting for a breeze to send them whirling to the ground. 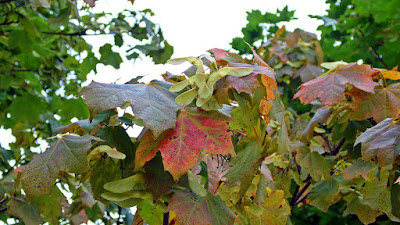 Further on, we paused for a while by Osborne's Pond where the Coots were busy diving for food on the bottom of the lake. 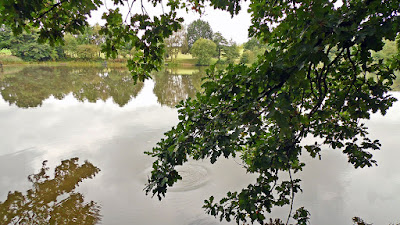 Then it was onward, up to Shipley Hill where the hedges were bejewelled with the brightest red, the fruits of the Yew trees. 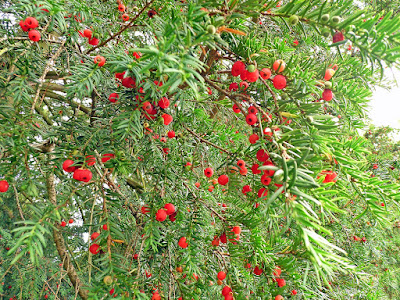 These colourful little fruits are actually modified cones, each containing just one seed and while the seed itself is poisonous, the red, fleshy part or 'aril' is edible. 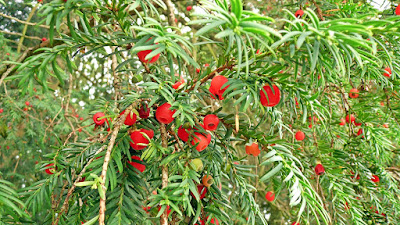 Yew seed cones develop and ripen over a period of several weeks, increasing the likelihood that they will be eaten and dispersed by birds. 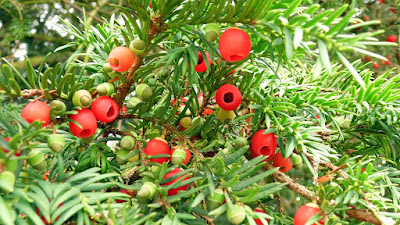 No doubt we will be returning to these gorgeous, red fruits for more pictures later in the season.
Posted by Stephen's Views at 12:59:00 No comments: Links to this post

It's that time of year, when our homes are invaded by various bugs and beasties which have no business being there. Having spent the summer in larval form, eating the roots of our garden plants, the Crane Flies or Daddy Long-legs have started to make their presence felt. You only need to leave a window open for few seconds with the lights on, and you will be likely to have one of these insects flitting about your room. Among the most common in Britain is one called Tipula oleracea. This one was found on our patio doors this morning. 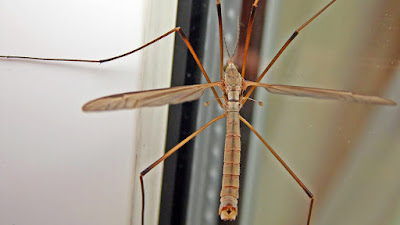 The blunt end to the abdomen shows that this is a male fly. 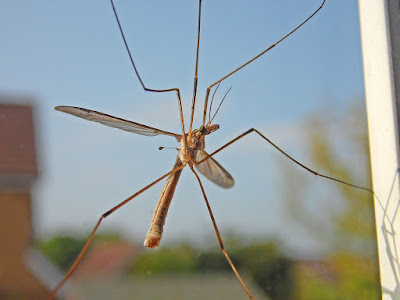 Crane flies have very obvious halters. Modified from hind wings, they are drum-stick shaped organs which help the fly to maintain stability in flight. 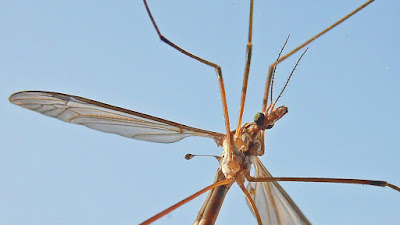 If you haven't noticed these creatures yet, stick around, they will soon be flitting around your living room too!
Posted by Stephen's Views at 13:18:00 No comments: Links to this post

Yesterday, we had a shopping trip to Meadowhall, Sheffield. So, no walk in the park yesterday, but we made up for it this morning with a walk through Shipley Park, round Cinder Hill and on to have a flask of coffee at Mapperley Reservoir. 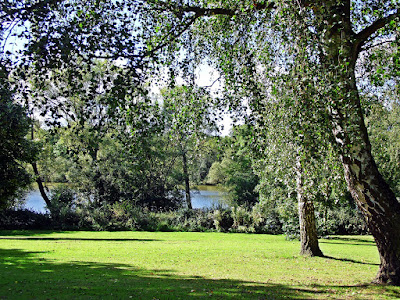 After a bit of a shaky start, the sun soon came out and despite a stiff breeze, it was warm again. The only problem was trying to keep all the Birch seeds out of our coffee. 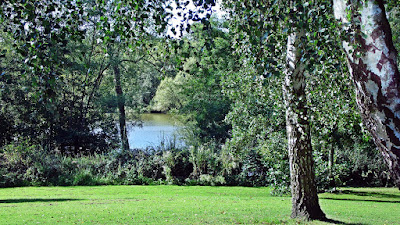 Coffee finished, it was back home along Slack lane and around the sheep fields of the Derbyshire Wildlife Trust.

When what is now known as Shipley Woodside, was part of the estate of Shipley Hall, the large lake was known as the fish pond (some pond!) These days, it is in the process of redevelopment, but there is a small 'off-shoot' of water to the south, close to the Nutbrook Coffee Shop. Back in the day, there was a boat house on the side of this smaller lake. Today however, the casual passer-by can still enjoy the scene as Malcolm and I did this morning, without the aid of a boat.

It's all a far cry from the old days of genteel elegance when the Miller-Mundy family from the 'big house', owned the lakes. This old photo shows the scene from about the same place and includes that boat-house. 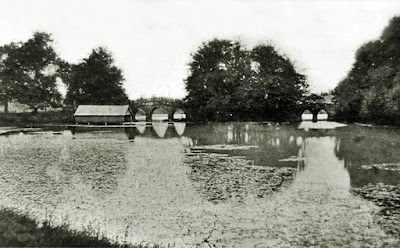 The bridge separated this small area of water, from the main lake beyond and it still does, but not so grandly! 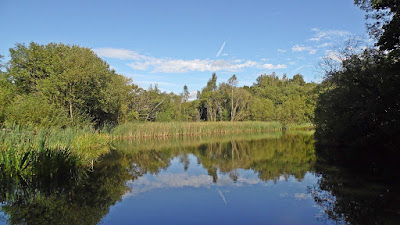 It's still a nice place to stand and contemplate the view on such a nice day. 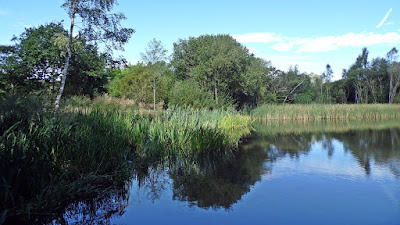 It was a little cloudy as we set out for our walk this morning and with a few spots of drizzle in the air, things didn't look too promising. But it soon brightened up and the sun eventually put in an appearance. We headed for Osborne's Pond today.

As we sat looking at the scene, a squirrel was dropping half-eaten acorns on us, so we moved on. At the water's edge, the last of the summer's Hemp Agrimony flowers are just hanging on. 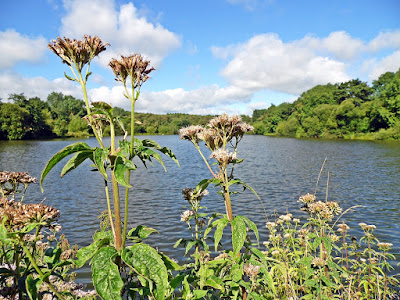 Dragonflies seem to be everywhere at the moment. as we walked along past Shipley Lake, a large, Brown Hawker flew by. Too quick for me to get a photo, I thought at first it was a Wren as it flitted past, such is the size of these insects. A few days ago, we encountered another Dragonfly as we crossed Parker's Bridge and this one settled long enough for me to get a picture. This time, it was a male Common Darter, resplendent in its red colouring. 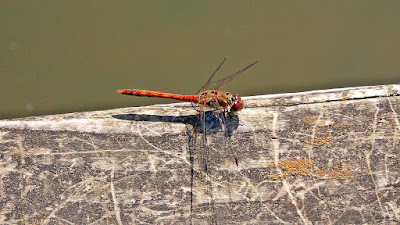 Lots of insects to be found around the cattle of Mapperley Village as we passed a few days ago. Poor things, they were being terribly pestered as they tried to munch the grass. Even the imposing bull in the centre of the herd wasn't immune from their attentions. 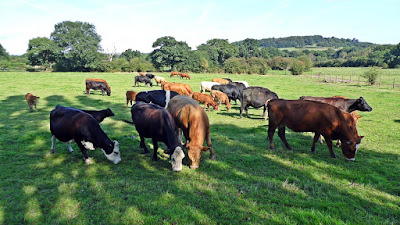