Once again, we've arrived at that time of year when the woodland floor is coated with its usual array of Snowdrops. 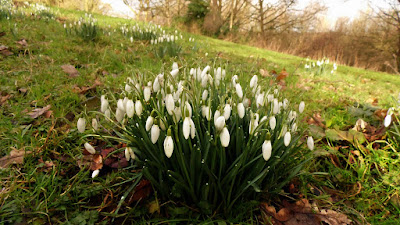 Our walk this morning, although still very wet under foot, was at least brighter than of late and a little milder too. So, we took in Shipley Hill and Mapperley Reservoir as we checked up on these beautiful harbingers of spring. 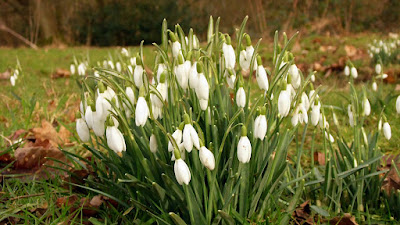 On the hill, the gardens belonging to Nottingham Lodge, were liberally sprinkled with them. 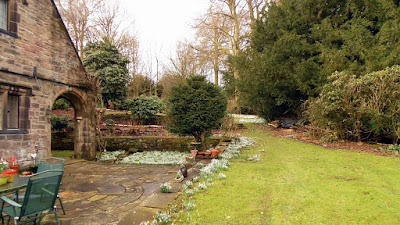 And the Derby Lodge too had its fair share. 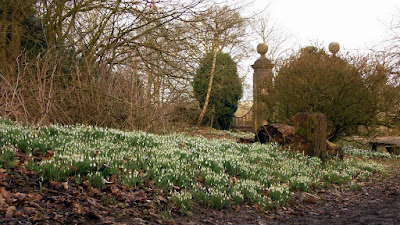 It seemed, everywhere you looked this morning, Snowdrops were waving happily in the breeze. 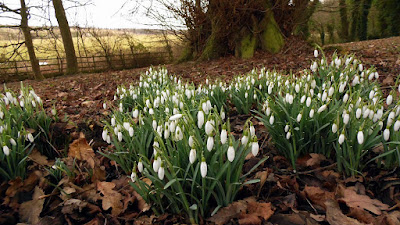 A very welcome splash of sunshine today, meant that the flowers were opening out to reveal their true colours - something of a rarity so far this year. 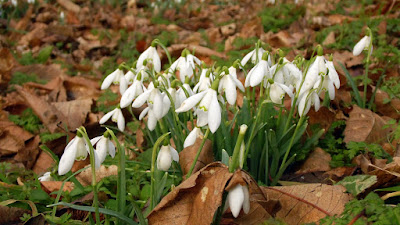 Today is also a special day for Malcolm's mum, as its her birthday. So, a very happy 87th to Mum 'P'- seen here with Malcolm, in Luzern in 2015. 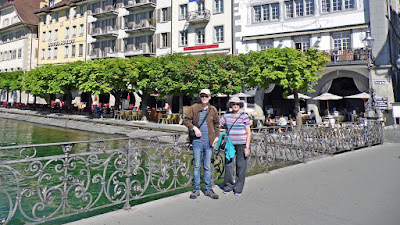 Once again, it has been a little while since I posted anything on this blog, due mainly to the rather inclement weather we've had to endure. But this morning, it started out dry and bright but bitterly cold, so we set out for Maperley and Shipley Hill. The wind was bitingly cold as we walked along Slack Lane, but despite the chill and recent bad weather, the Hazel trees are all bursting out with catkins. 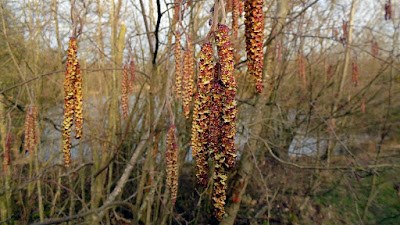 Always among the first of the year's trees to flower, the male catkins always appear before the tiny, red female flowers. These catkins were producing plenty of pollen. 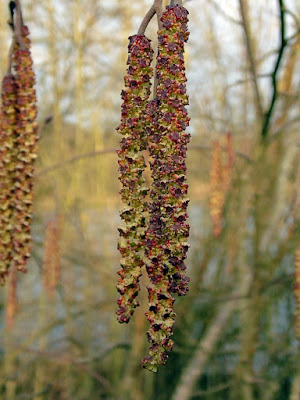 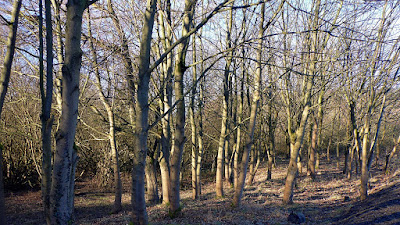 On Shipley Hill, the Nottingham Lodge is surrounded by bare branches, but the ground is covered with Snowdrops (more of them soon). 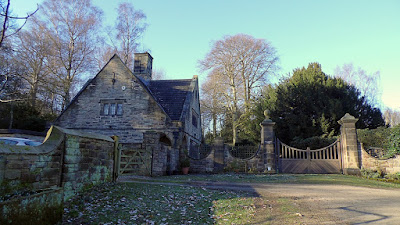 It was near the lodge, that we were treated to an unexpected surprise. I have been reading reports of recent sightings of Hawfinches (Coccothraustes coccothraustes) around Shipley Park, but as yet, I've never seen one. So it was fantastic to finally get a view of a couple this morning. 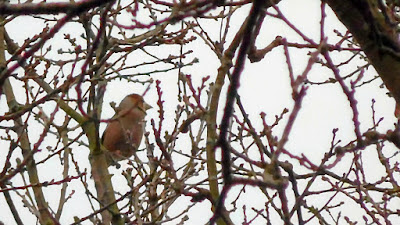 Sitting in the very top of a tree and at some distance, this one was very difficult to photograph - and it proved to be impossible to get a good picture at all. But even so, you can still see the unmistakable form of Britain's largest finch species. Looking bulky even at this distance and with a bill which can easily crack a cherry stone, this is a formidable bird and rather rare these days. But with an influx of individuals from continental Europe this winter, there has rarely been a better opportunity to see one. You just have to be in the right place... 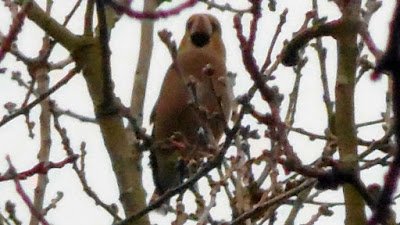 ... at the right time. Even then, you need a little luck!  What a fantastic new 'tick' for the life list.
Posted by Stephen's Views at 13:12:00 No comments: Links to this post

While settling in to the new year, I have also been rather busy settling into a new computer - two new computers to be exact. My old PC had been misbehaving for some time following a huge update from Microsoft which left several programs not working. So after Christmas, I decided to bite the bullet and have a nice new one. I originally opted for a shiny new Lenovo all-in-one computer and set about transferring all my bits and pieces from the old one - a job which took quite some time. It was at this point that the new PC started crashing and spontaneously rebooting itself for no reason.
So, after a very frustrating couple of weeks trying to fix the problem and getting absolutely nowhere with Lenovo's on-line 'Help and Assistance' (a complete misnomer), it went back to Argos and I am now sitting looking at a lovely new Acer computer with full HD screen and all the bells and whistles I could wish for.

So, it's now time to get back to normal and start posting a few pictures once more - and we start with a short walk this morning, around Straw's Bridge.
Everywhere is very wet following an extremely rainy few weeks, so you have to be particularly careful where you put your feet, but the sunshine was beautiful this morning. As we walked along the old Nutbrook Canal, the overhanging Hazel trees were dangling their catkins over the water, catching the light. 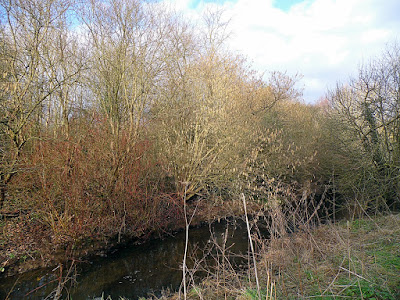 At 'Swan Lake', the bright sunshine was filtering through the dried seed heads of old Phragmites reeds, making them shine like silver. 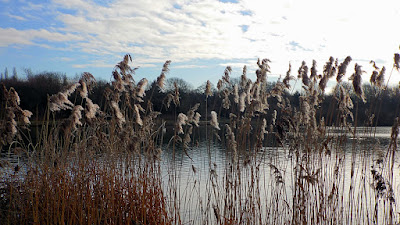 Near by, the flooded pits which make up Pewit Carr, looked dramatic in the sun against a rather threatening sky which promises some snow later. 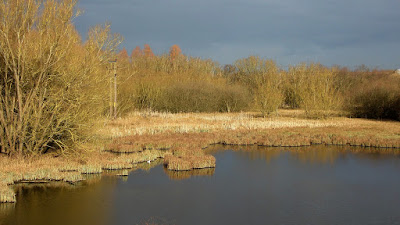 All the usual suspects were to be found around the lakes, including these three Mute Swans - complete with their fetching colour-coded leg rings. 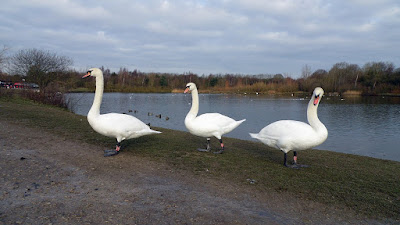 One in particular, was very photogenic... 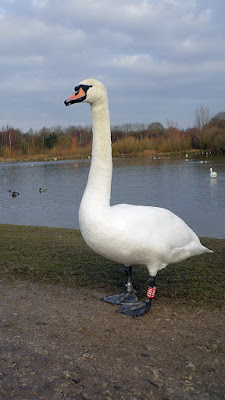 and was happy to have his picture taken. Mind you, if you looked as good as this, why not? 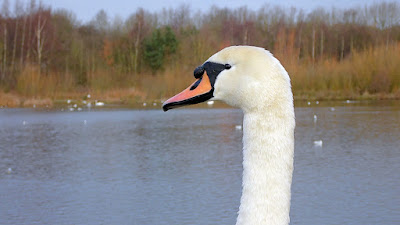 Time for one more snap of the silvery reeds before heading home for a hot coffee and to get warm again. 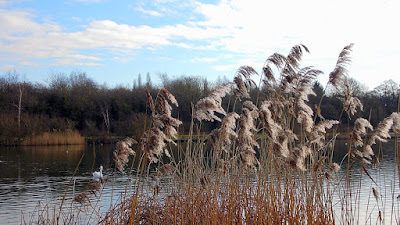