This time last year, we were in the middle of a cold snap with snow on the ground and a distinctly chilly feel to things. One year on and this morning found Malcolm and I taking a sunny walk along slack Lane towards Mapperley Reservoir. Chillier than of late, it was nonetheless milder than a year ago.

At the far end of the reservoir, a large flock of Black-headed Gulls were drifting about in the breeze, highlighted by the sunshine. Apart from the gulls and a few Coots and Tufted Ducks, there was little of note on the water. One of the drawbacks of a mild winter is the almost complete lack of over-wintering wildfowl.
Walking on, we came to the old boat lodge house and a rather colourful look along the reservoir footpath. 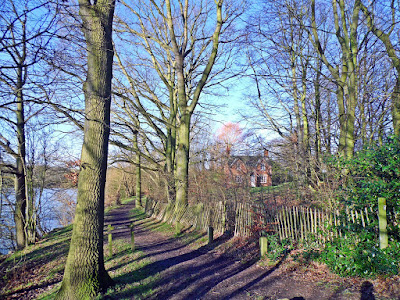 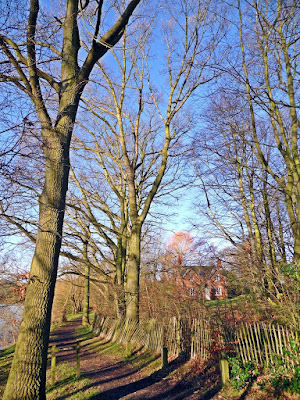 Onward and upward, we set out for Shipley Hill and the main reason for doing this walk today. With such mild weather, the Snowdrops and Daffodils are blooming much earlier than usual this year and we wanted to check on them. Still just a little premature with our expectations, the Snowdrops are just starting to open and the daffodils have a little way to go yet, but a few are starting to show some colour. 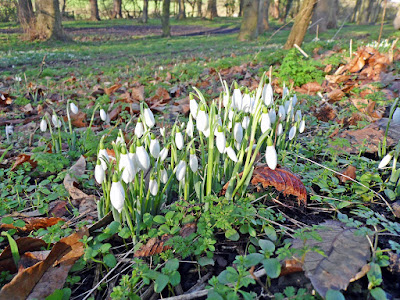 The Snowdrops which are in bloom, are those found growing in patches of sunlight between the trees leaving their shady neighbours with about a week to go before they get their moment in the sun. 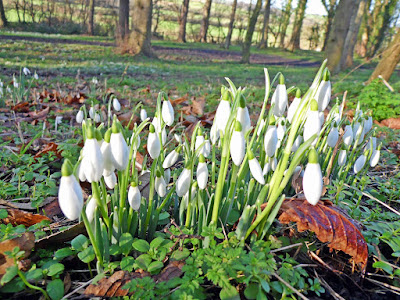 After a very brief cold spell, we've settled back into the mild, wet and breezy conditions which we have come come to expect this winter. Very wet under foot, with mud everywhere and puddles threatening to soak a badly placed training shoe, we set out for Pewit Carr this morning. 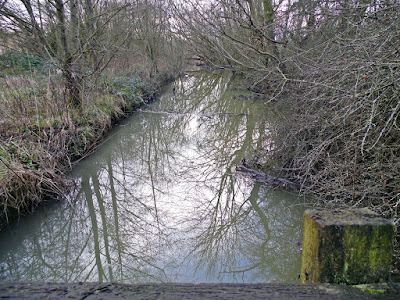 Crossing the footbridge over the old Nutbrook Canal, the water was grey and muddy too. The overhanging trees and shrubs were every bit as grey as the water. Probably the only colour came from the moss growing on the wooden hand rail. 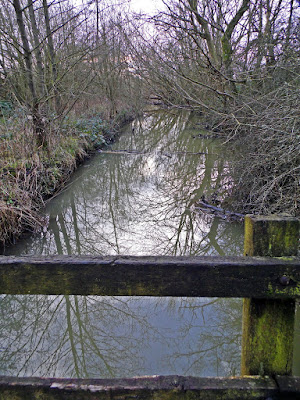 Onward to Straw's Bridge and the Blackthorn trees which grow around the lake, have started to bloom in the unusually mild weather. 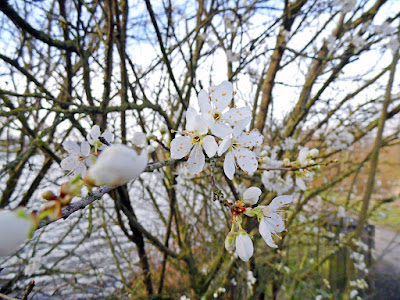 Last year, we had to wait until well in to March before we got to enjoy these delightful little flowers. What a difference a year makes. These Blackthorn flowers are about eight weeks ahead of last year. 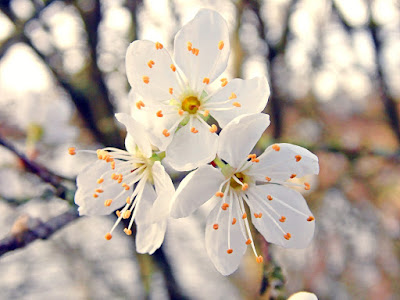 Following an impressive sunrise this morning, the sky had turned from the vibrant pink of first light, to grey and dull by the time we set out for our walk. The thermometer was hovering around freezing point, so we were well wrapped up as we strolled around Shipley Park. 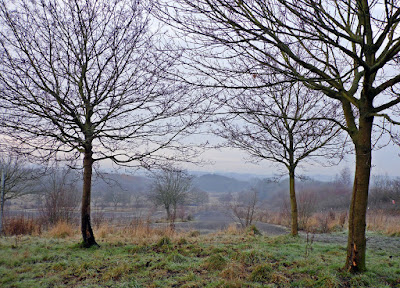 The snow which fell last Saturday night, has long gone, but it looked pretty good while it lasted and the scene we woke to on Sunday morning was decidedly chilly. 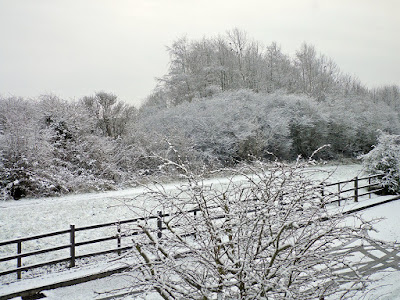 While on the subject of chilly weather, we felt very sorry for the Grey Heron we spotted in a tree around Pewit Carr the other day. Huddled against the cold, he didn't look too impressed as I struggled to get a good shot in the gloomy weather. 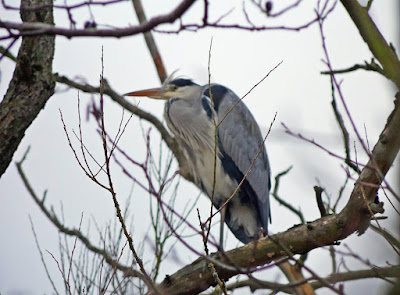 After what seems to have been age, we finally got some wonderful, sunny, clear and cold weather this morning. So it was with hats and scarves, that Malcolm and I sallied forth into the winter air for a walk through Shipley Park once more this morning.  The sky was sparkling blue.. 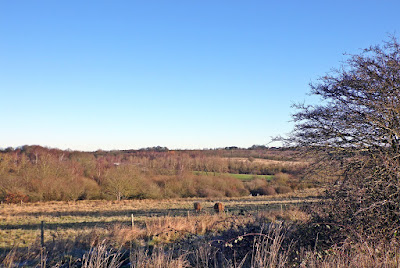 And the sun was creating some very long shadows across Slack Lane as we headed for Mapperley Village. 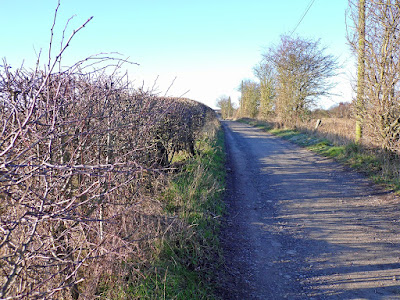 On the other side of the hedge to right of us, the Highland Cattle were seemingly oblivious to the chilly weather and continued chewing the cud regardless. 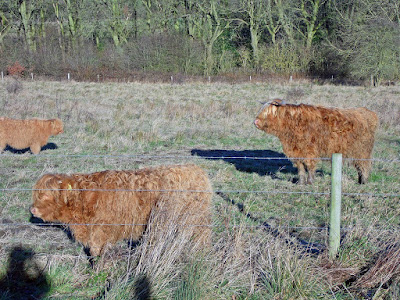 Their thick, curly coats were just the thing against such a chill while Malcolm and I pulled our scarves higher and our hats lower to keep warm. But what a beautiful morning it was and what a joy to be out and about once more. 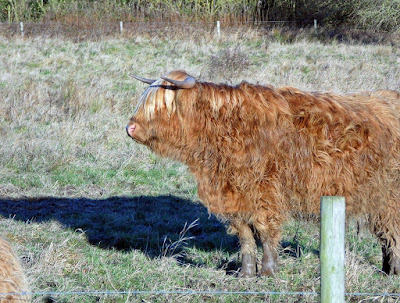 Well, things have bee pretty hectic lately. I always prefer a quiet and uneventful life if possible, but the new year has begun on a rather frantic note. With my mother being admitted to a nursing home, it has been necessary to empty her house and sort out no end of legal bits-and-pieces as well as utilities and a myriad other things. On top of all that, I have been battling with my phobia of the dentist and had to have a tooth extracted. So, I'm afraid the blog has had to take something of a back seat so far this year.
Thankfully, the weather has been pretty grotty too so walks in the countryside would still have been rather tricky at best.
So, don't think I have abandoned the blog. Things will no doubt get back to normal soon!
Posted by Stephen's Views at 13:46:00 No comments:

Here we go again, another year begins and it has begun rather wet. We set out for a short walk this morning, making the most of a rare, dry spell before the drizzle started again. The footpaths and byways were filthy with mud, rotting leaves and twigs and everywhere was wet. Round Straw's Bridge, the path under the old railway bridge has been flooded for some time now, but the waters are getting deeper. 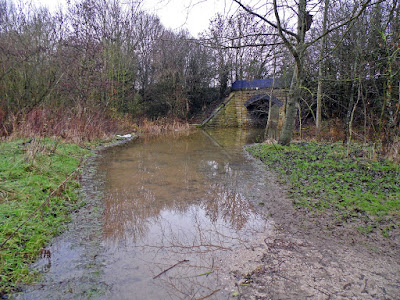 No way through there at the moment, so it was back home again before the rain started once more. 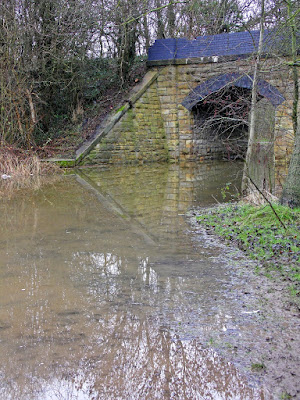 Not a very good start the new year, lets hope things improve soon.
Posted by Stephen's Views at 12:22:00 No comments: