Everywhere is wet.  Under foot it's wet, under the trees it's wet and where it's not wet, it's flooded.  Here, among the trees of Peewit Carr, what is usually just a damp patch, this morning was a small lake trying to become a large lake. 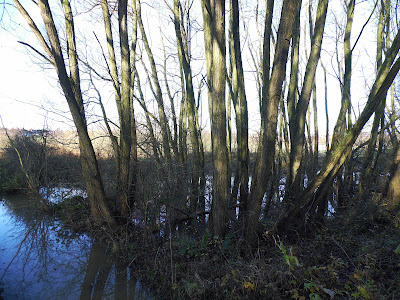 After the rains of the past couple of days, the Nutbrook Canal is in full flow again making the scene through the trees dark, wet and muddy-looking. 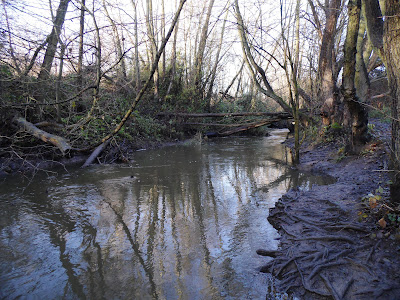 At least the weather was much better this morning, so despite the wet, we had a good walk - albeit keeping to the made-up paths.  The view from the top of the bank which acts as a barrier between two lakes, all was sunny and bright.  You can just see the lake to the right has risen to encroach on the grassy banks. 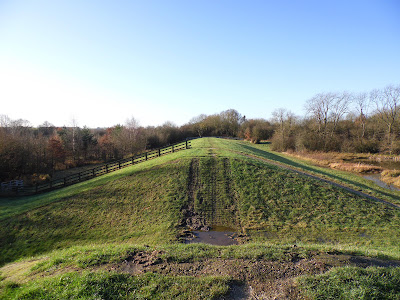 Difficult to imagine, but not too long ago, if we had been standing on this spot, we would probably have been looking straight at the front of a train hurtling towards us on it's way to Ilkeston Station about a half mile behind us.
Posted by Stephen's Views at 12:46:00 1 comment:

What a relief, after a few days of being unable to get out and about, to get out for a walk again this morning. The weather was threatening to ruin our plans once more, but it did stay dry long enough for us to get a walk round Straw's Bridge.  The trees were blowing about in the strong wind and the leaves have all but gone now.  after yesterday's heavy rain, the brook was full and flowing very fast and the well-filled lakes were being whipped up by the gusty wind.  a rather miserable looking Heron was standing huddled against the elements across the lake here. 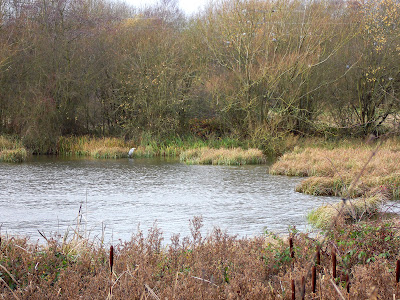 On to 'Swan Lake' and the skies were getting ever darker.  Here too, the water's surface was being disturbed into small waves by the wind. 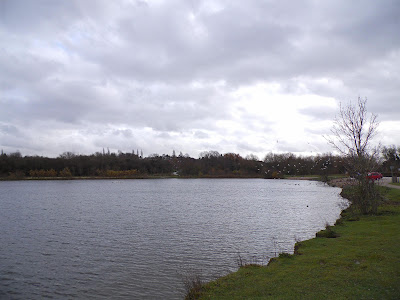 The arrival of a bread bag brought the gulls, ducks, geese and swans across to the car park, all looking for a quick meal.  The gulls seemed to be doing better than anything else! 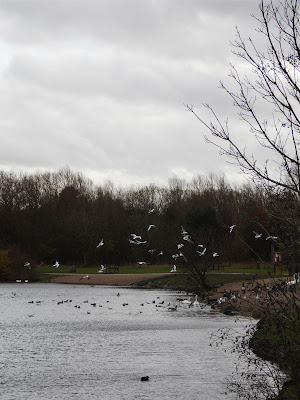 With the sky getting darker by the minute, we thought it best to turn our toes toward home, but at least we had the 'cobwebs' blown away this morning.
Posted by Stephen's Views at 12:46:00 No comments:

A nice, long walk this morning took us our usual way round Shipley Lake, past Osborne's Pond, up the hill and round the top.  Surrounding the site of the old hall at the top of the hill, the 'Suffragette Wall' is a solid presence among the Autumn foliage. 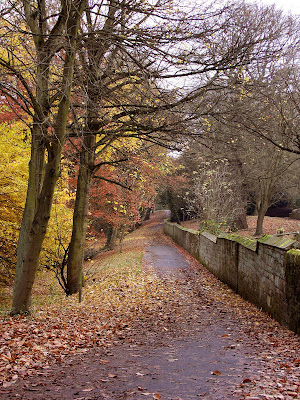 Since the path was improved with tarmac, walking around here has become much more a pleasure and its lovely to tramp through the thick carpet of fallen leaves. 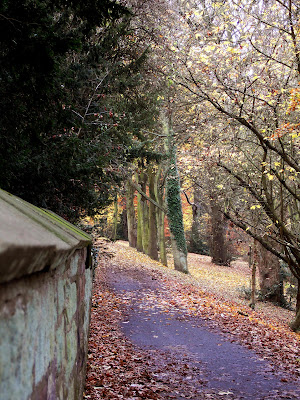 The wall itself has become a haven for micro wildlife living among the lichens and mosses which have colonised the stonework.  Birds have made their nests in the many cracks in the wall and one of the stone piers at the end of the wall has become a feeding site where bread and seeds are frequently left for the birds and squirrels.  Malcolm likes walking here too... 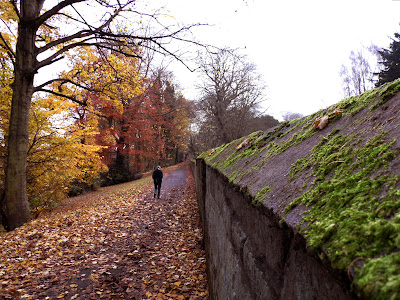 No walk in the park for us today, as we had our little bit of 'social responsibility' to perform and took our friend Winnie to vote before voting ourselves on the way back.  While at Winnie's though, I was delighted to spot a lone Camellia flower had burst into bloom, despite the damp, cold and foggy conditions.  A little splash  of pink perfection in an otherwise grey day. 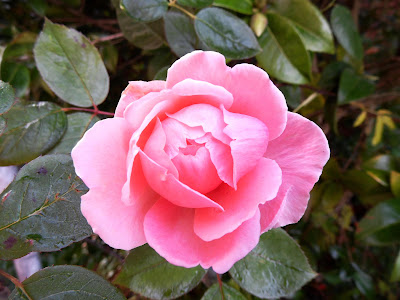 Another splash of bright colour was to be found the other day around the lakes of Straw's Bridge.  The fruits of the Guelder-rose (Viburnum opulus) bushes are always a joy to see shining bright red in the sunshine. 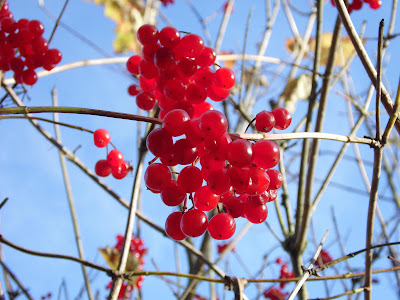 Nice to look at, each fruit is a 'drupe' containing a single seed which is designed to be dispersed by birds.
Posted by Stephen's Views at 12:57:00 No comments:

Just a couple of pictures today, both taken on our shorter walk around the lakes of Straw's Bridge this morning.
The smaller of the lakes is frequently the quietest too and this morning was no exception.  With only a Moorhen and a distant Coot to disturb the surface, there were some pretty good reflections on the water. 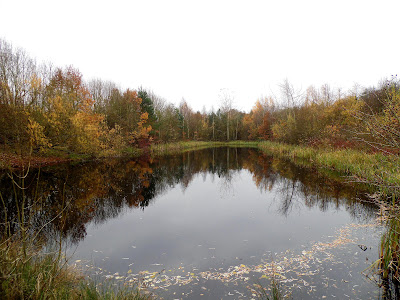 Under the grey skies, the colours were not so spectacular, but nevertheless, still well worth stopping to take in the view before returning home for coffee. 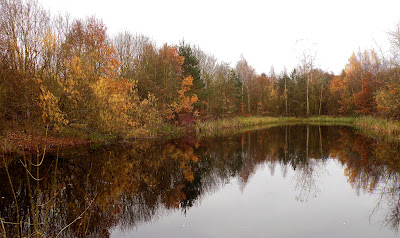 Our walk this morning took us along the Nutbrook Trail towards Mapperley Village.  Passing through the surrounding farmland, we had some more beautiful views of Shipley Hill in it's Autumn finery.  I know I keep banging on about how wonderful the colours have been this year, but when faced with such beauty, I think a little 'gushing' is more than excusable. 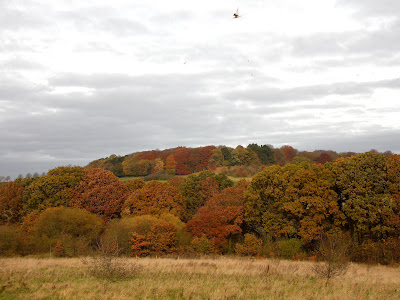 There are also at least 11 Black-headed Gulls in the picture above swirling about above the fields, some more easily spotted than others.
The elusive Tufted Duck which proved so tricky to photograph the other day, was still rather camera shy this morning as we passed Mapperley reservoir.  I just manged to snap one shot before he dived beneath the surface and swam away. 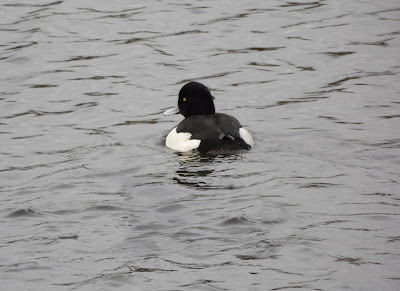 His glorious white sides seemed to glow against the dull, grey water as his keen, yellow eye kept a close watch on me waving my camera at him.  Better luck next time - perhaps!
Posted by Stephen's Views at 12:46:00 No comments:

Only one topic of conversation today.  The arrival of several Waxwings (Bombycilla garrulus), those wonderful, colourful, acrobatic and simply fabulous birds from Northern Europe. 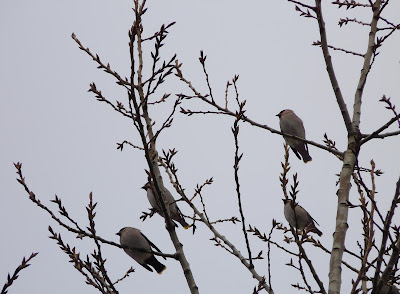 I have been keeping an eye open on the 'net' over the past few days for reported sightings in the hope that we may be lucky enough to see some again this year, but I wasn't really expecting to just 'stumble' across them this morning. 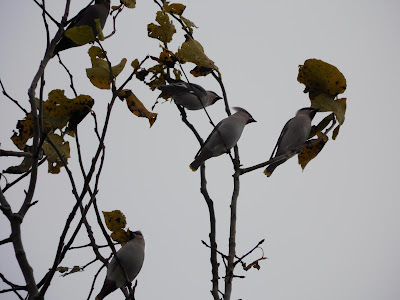 And yet, there they were.  A group of about a dozen were twittering their silvery trill in the top of a poplar on our way to Straw's Bridge.  What a delightful sight - and sound - they made on an otherwise dull day. 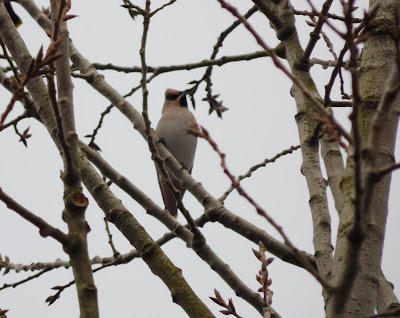 Hopefully some better pictures will be forthcoming over the Winter as, because the Waxwings stayed frustratingly high in the trees, these are a little disappointing.  Another larger flock were seen later when we got home and I was in the garden.  Some thirty or more flew over head and into the trees beyond the estate, so it looks like we may have lots to look at in the coming weeks.
Posted by Stephen's Views at 12:31:00 No comments:

Our walk yesterday, took us past Mapperley reservoir and there were the usual selection of wildfowl to be found on the water.  Among the most numerous of these were the Tufted Ducks.  Delightful, little ducks these and they always repay a few minutes watching with their busy antics.  The two closest to us were particularly busy diving for food, so I thought a picture would in in order.  Things didn't go quite to pan, but the rather happy result was a picture of the splash made as one of the ducks disappeared beneath the surface.  Tom Daley would have been proud of a dive like that! 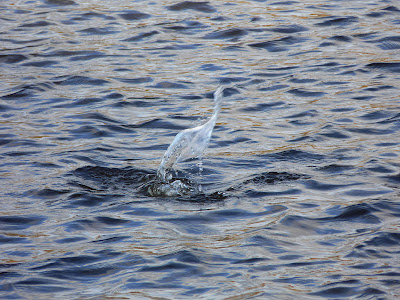 Previously, we had been enjoying the thick carpet of fallen leaves on top of Shipley Hill and the sunlight filtering through the increasingly bare branches. 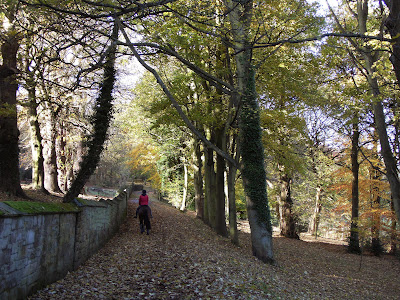 There is a tarmac road beneath that lot somewhere...
Posted by Stephen's Views at 12:32:00 No comments:

Malcolm and I had a wonderful walk this morning which took us up and over Shipley Hill, down the other side towards Mapperley Reservoir and the village, before returning via Slack Lane.  The sun was shining as we made our way up the hill which made for a lovely view of Nottingham Lodge with a blue sky and golden leaves behind it. 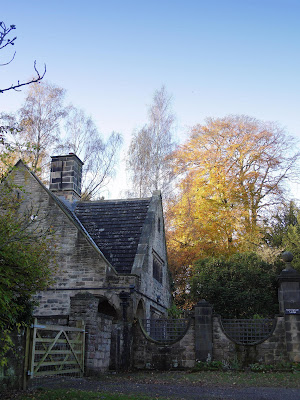 From our return journey along Slack Lane, the view of the whole hill was stunning as the sunlight picked up the gold and red of the Autumn trees, still holding on to their colour despite a stiff breeze.

Not everyone was interested in the view however.  A small flock of Jacob Sheep, grazing in a nearby field, were to say the least, unimpressed as they kept their heads down, nibbling the grass. 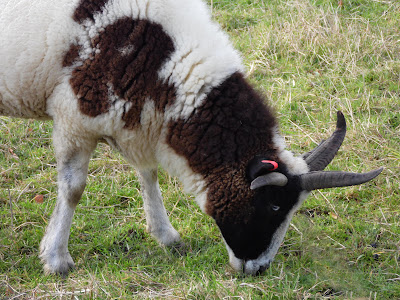 The clear and cold nights this weekend have meant that we have had a good view of the moon.  As it has been rising in the East, it has been accompanied by Jupiter shining brightly. 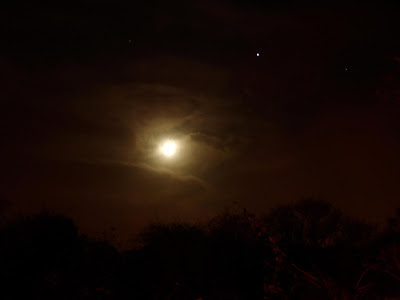 In the mornings too, the moon has been still shining bravely against the bright blue sky.  In this light, the bright 'spot' of the crater Aristarchus is clearly visible as the brightest point on the moon's surface.  Also the huge crater 'Grimaldi' which appears as a dark spot on the left of the image, is very evident.  Beautiful! 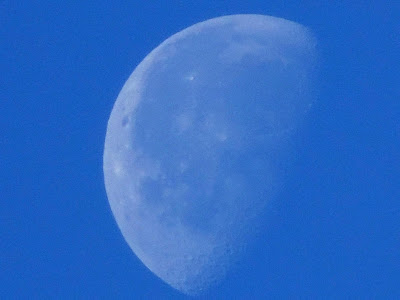 Just a couple more pictures from yesterday's walk to Straw's Bridge.  The Black-headed Gulls were being particularly vocal in the face of a bag of 'Kingsmill', but this one seemed more interested in the pile of seed which had been left on a post. 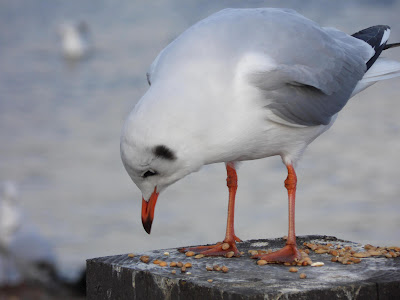 Not surprisingly, he soon got bored with the seed and started squabbling for the bread with his mates.  But what a glorious bird he was. 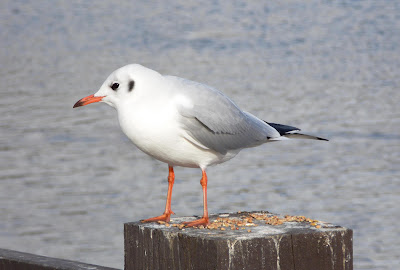 After our rather abortive attempt at a walk yesterday - thanks to the rain arriving just at the time we decided to set out - we had a nice walk to Straw's Bridge this morning, in the sunshine.  Not that there was much sun to be had under the canopy of trees along the old Nutbrook Canal. 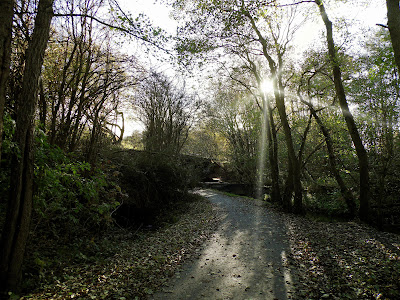 The sun was doing it's best to get through the tangle of branches and the waters of the old canal, swollen after yesterday's rain, were glinting in the gloom. 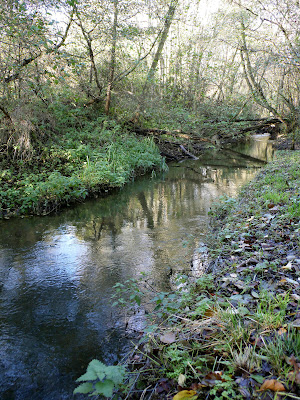 Arriving at 'Swan Lake' the usual feeding frenzy was going on as someone turned up with a bag of bread for the ducks, swans, coots, moorhens and the ever-hungry black-headed gulls.  But they do look beautiful against a blue sky. 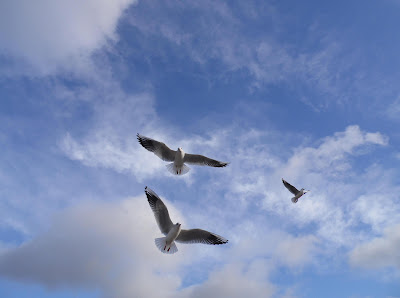